Monarch On The Decline

Posted on February 27, 2021 | Comments Off on Monarch On The Decline

The butterflies covered an area of 2.1 hectares this season, 0.73 less than last winter. 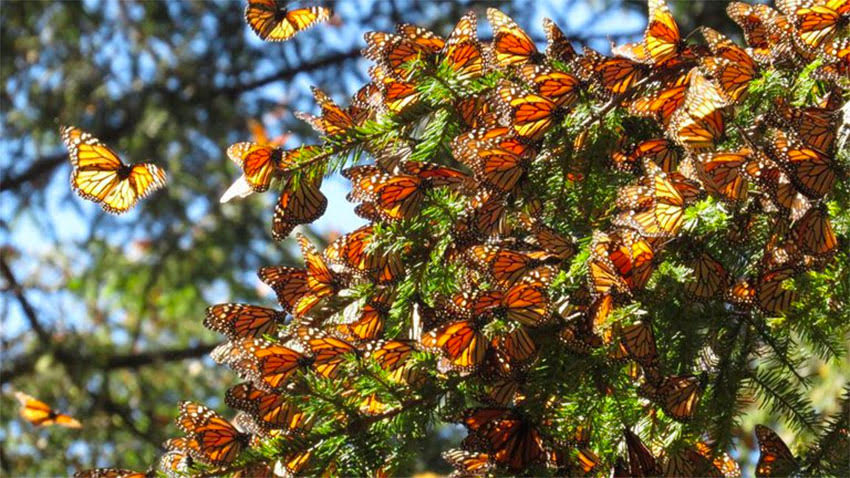 Illegal logging and climate change contributed to a 26% reduction in the number of monarch butterflies overwintering in Mexico in 2020-2021, according to the World Wildlife Fund (WWF) and the National Commission of Natural Protected Areas (Conanp).

Monarchs, which migrate to Mexican annually from Canada and the United States, covered an area of 2.1 hectares in the pine and fir forests of México state and Michoacán in December, a reduction of 0.73 hectares compared to the same month of 2020.

WWF México said in a statement that joint studies it carried out with Conanp and the National Autonomous University found that almost 20.3 hectares of forest in the Monarch Butterfly Biosphere Reserve were cleared between March 2019 and March 2020. The quantity of deforested land was four times higher than the previous year when five hectares of forest were cleared.

WWF México director Jorge Rickards said the main cause of deforestation in the reserve was illegal logging. The most affected areas were the Cresencio Moralesejido (cooperative) in Michoacán, the area surrounding the community of San Felipe de los Alzati in the same state and indigenous-owned land in the municipality of Nicolás Romero, México state.

Wind and drought were also cited as factors in the degradation of forests.

The WWF statement also said that climate change had a “considerable impact” on the monarch butterfly’s migration process.

“During the spring and summer of 2020 the climatic variations in the south of the United States were not favorable to the flowering of milkweed and the development of eggs and larvae. This limited the reproduction of the population of monarchs, with an impact on the migrant generation, which caused a reduction in the population of this insect in all of North America and as a consequence lower occupation in Mexican forests during their hibernation,” the organization said.

Rickards called on authorities in Mexico, the United States and Canada to work together to seek solutions to the problems monarch butterflies face. He said the insect itself is not at risk of extinction but its migration process is under threat.

Two years ago, monarch butterflies clustered in pine and fir trees covering 6.05 hectares, almost triple the area they covered this year, and in the late 1990s they spread across areas as great as 19 hectares.

However, the area covered by the black and gold-winged insects declined 53% last year and an additional 26% this year. The reduction compared to the winter of 2018-2019 is 65%.

Post Views: 116
This entry was posted in Environment. Bookmark the permalink.