(Editor’s note:  So most  of us have been fully vaccinated, and in some states the restrictions for mask-wearing are lessening.  That’s wonderful news, but it’s still a bit scary because some groups are still ignoring the restrictions and ignorant people are still objecting to wearing masks.  The actions of a lot of people in this country has been infuriating to many of us, and we’re embarrassed at the behavior of our country. Now some groups are  PAYING people to get vaccinated.)

Statues stand all over the South
Stone and Metal and Concrete reminders
Of a war that was fought, and lost
Of a Confederacy that lived a mere 4 years
But which still casts a shadow on our Nation.

They call it the War of Northern Aggression
And pretend that Slavery wasn’t the reason.
And that slavery wasn’t that bad,
And besides, it was all so long ago.

But it was that bad, and worse.
Rape, and beatings, and starvation.
Torture, and murder,
Children sold away from family
People treated as animals, owned
Just another part of the economy

(If you have any imagination, any sense
Of empathy for others, please use it now)

And so the War was fought, and many died.
Brother fought brother, families torn apart
A country divided
A war that laid a country to waste

But finally it was over
And General Lee, himself, spoke out
I think it wiser, he said
Not to keep open the sores of war

And then a wondrous thing happened!
In Carolina, Black and white came together
As a political power, to do good for all
They rewrote the Constitution
Helped the children, and the widows, and the sick
And expanded voting rights

But White Supremacy wasn’t dead
And decades after the War,
It reared its ugly head.
The KKK became powerful

A coup in Wilmington, where white and Black
Worked peacefully together in politics and life
Killing “race traitor” whites, as well as Blacks
And killings elsewhere, under the safety of their hoods

And so they then erected statues
Not in private, but in places of power
Confederate statues, from when whites were Supreme
Statues meant to remind Blackies of their place

And later, in Jim Crow
More statues went up
Statues meant to send the message
Whites are still in charge
(And that wasn’t so long ago!)

And now, as Black and white come together
And attempt to heal our country
From the racial divides that have hurt us for so long
From the sores of a war long over but never laid to rest
The statues must come down

Those statues serve one purpose:
To divide Black from white, and Black from power
And so we should hold these statues no more in the public square
There are cemeteries aplenty to remember your dead

3/16/21 — Powerful and to the point. No ambiguity. Dottie: may I share this with my book group? Cindy Dennett Yee
* Susan would love it.  Dottie

3/16/21 — What a thoughtful, studied response to an important issue. Yeah Susan. Just like her mother. Barbara Hartt Hise

3/17/21 — Susan’s poem is powerful and thoughtful.  She must take after her mother!  Sally Sarah Stearns Gipson

3/17/21 — I wonder where Susan learned to write such lovely poems!
Bette

3/23/21 — Dan and I watched the movie “One Night In Miami” which is streaming exclusively at the moment on Amazon Prime Video.  As you probably have read, it is about a fictional meeting of Malcolm X, Muhammad Ali (then called Cassius Clay of here “Cash” by his 3 good friends, which they actually were in real life), NFL football star Jim Brown, and top-of-the-charts singer Sam Cooke in a room at the Hampton House in February 1964, celebrating Ali’s surprise heavy weight title win in Miami over Sonny Liston, and starring respectively  Kingsley Ben-Adir, Eli Goree, Aldis Hodge, and Leslie Odom Jr.
Reviewer A.O Scott said in the NY Times:  “This is one of the most exciting movies that I’ve seen in quite some time” and I couldn’t agree more.   The dialogue is fascinating, the acting superb, and the story totally credible and timely.  Leslie Odom Jr as Sam Cooke really deserves his Oscar nomination this year in the “Best Supporting Actor” character (Oscar Ceremony is April 25th by the way, and I hope he wins)– he’s rivetting, sobering, and yes, his singing is not only smack on but will move you to tears with a combination of joy and sadness.  And the other three are dead-ringers for the inspirational celebrities they depict.  It must have been incredibly hard for all of them to play these well-known people without going over the top or sounding off key.  And the screenwriter who based the movie on a play of his own with the same name, is also nominated for “Best Adapted Screenplay” at the Oscars, and deserves to win as well in my book.
If I haven’t convinced you to see it, read A.O. Scott’s full review.
Judy K Judy Kennedy Marshall

3/23/21 — I totally agree, Judy.  I thought they all were terrific but Odom was very special indeed and  brought me to tears.  My other surprise like was Trial of the Chicago 7.  Though I remembered the incident, not the details and it was very illuminating.  Cheers, Kim

3/23/21 — Judy your review is terrific and it is now definitely on my to see list. Nancy

3/23/21 — Were we “separated at birth” or something, Kim??!!  At any rate, remember great minds think alike —  and “like Trial of the Chicago 7?,” I did — very much.   I thought that Sasha Baron Cohen was absolutely awesome as Abbie Hoffman  and Frank Langella as Judge Whatshisname, perfectly cast in a tough role to make real (memory lapse on the name– sorry).   The incident itself made a big impression on me at the time, but the movie even more so, now that we can see it with perspective and time.  Both of these movies made me feel that as a nation we seemed to be on the right path forward originally with some insightful leaders to guide us, but some how we didn’t make nearly as much progress over the last 50+ years as I either thought then that we would, or as I thought we were as we were living in them and maybe not paying enough attention.
Very sobering to think that we should have tried harder to right things sooner.  Judy

3/23/21 — You are so right, Judy!   I find the steps forward we have made very meaningful but definitely nowhere near enough!  And when someone like Trump has followers who continue to believe in all these lies, it is so discouraging! Sigh…..Kim
P.S. Less discouraging news is that I got 3 more pics today so hopefully Barb’s email had some impact! Send those current pix in everybody!  Parade deadline next week!

3/23/21 — Judy, Wholeheartedly agree about the movie and second all that you said! Barbara (Williamson) Bucholtz 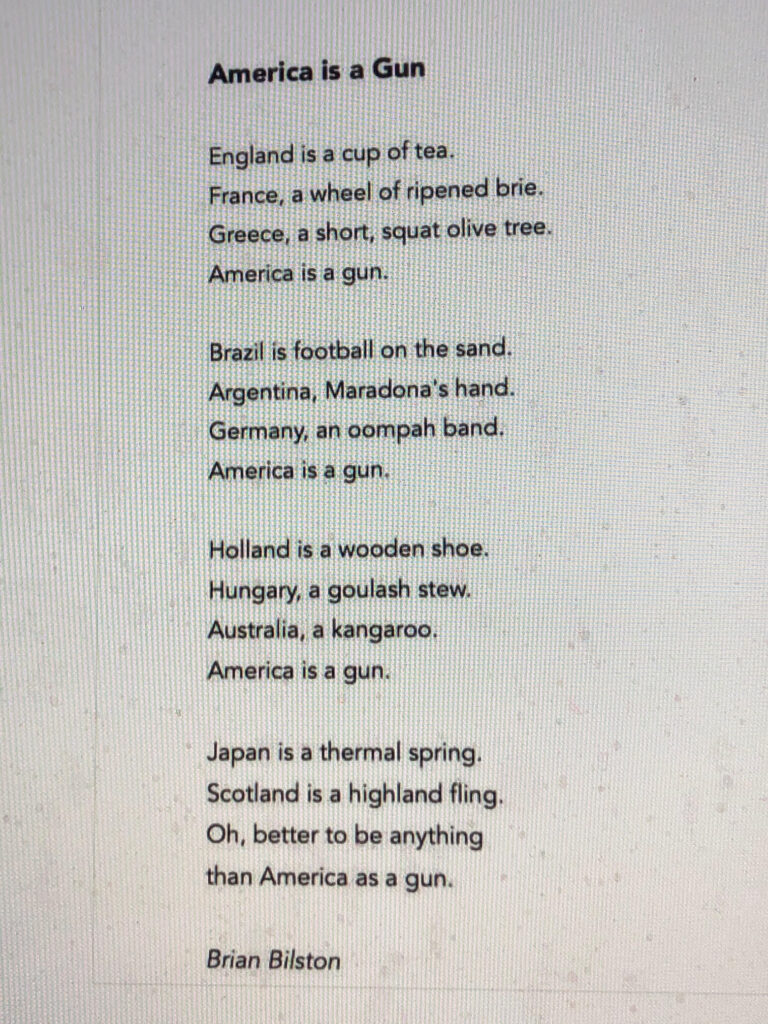 I am pretty darned discouraged with all the guns and the inability of our legislators to pass some meaningful gun legislation.  It has been over 20 years since my nephew was shot and killed, and things are not in the least bit any better.  Disgraceful.  This speaks to me.
Hugs, Liz WF

3/27/21 — Liz–that was a terrible thing to happen to your family!  I do remember it. And really terrible awful that nothing has changed. I feel for you. A very sad poem.  xoxoxo Babbie

3/28/21 — Couldn’t agree more.   So sad for our country to be thought of this way.  Sad and horrible, that our Congress cannot even pass better background checks and reinstating the automatic weapon ban.  I don’t GET it!   Betsy

3/27/21 — Bryan, a cellist, is live-streaming on Facebook NOW. 8:50 pm it should be ready to start  Beautiful Tchaikovsky Serenade for Strings. Londontowne Symphony Orchestra.  Sorry I didn’t know sooner. Hugs to you all — Liz WF

3/27/21 — Thank you Liz. It was wonderful. Haven’t seen Bryan since the 50th but thought he was stage front 3rd row? Barb (Douglass)
* Thanks for the note and so glad you liked it. Liz

3/27/21 — Hi, friends, who are nice enough to want to hear Bryan play in this concert.   For us it was the first time we have gone out for an event and it was in a beautiful Baptist church.  Go to Facebook; go to”search”(the magnifying glass); “Londontowne Symphony Orchestra” — scroll down to a video called “Dvorak and Tchaikovsky concert”.    Bryan is stage front far right.  The Serenade for Strings in the most magnificent piece.  There were about 40 strings last night.  It was truly glorious in person.  I haven’t yet seen the video.
Thanks and cheers and hugs — Liz

3/31/21 — Let me add my enthusiasm to the encouragements of Dee and Barbara.
Lots of effort is going into programming for our 60th reunion, and Barbara Freeman Douglass is doing a fabulous job as our Reunion Chairwoman. Throughout the two days: Friday, May 21st and Saturday, May 22nd:  the Parade, tours of the campus and a Class of 1961 photo show will be available online.  Here are a couple of notes on our Class of 1961 Program:  It is not yet “fixed”, but this will give you the idea.
On Friday, May 21:  you can Zoom into lectures provided by the College throughout the day, and/or just Zoom for our Class reunion activities between 6 p.m. and 9 p.m.
On Saturday, May 22:  there will be various Program offerings (by our Class and by the AlumAssoc) between 9:30 am – 4:30 p.m., EDT,  followed by our Class of 1961 Class Mtg, a time of Remembrance, a dinner break and then evening entertainment.  (e.g.: a return of the Turkey Baster Band, for sure!)  Kim will lead us in the Good Night Song to close out our Reunion at 8:30 p.m. EDT on Saturday.
The beauty of Zoom is that you can come and go at will, and without travel time or financial cost. (And, no-one is taking attendance)
SO:  Sign up! And, please send your one page Bio to Fran Blair:  fblair39@centurylink.net. (Our booklet will be printed this year, and sent to you.)
It will be so good to see you! ~ Bobbi (Childs Sampson)

4/1/21 — (Editor’s Note:  Because many of us have started getting into organizing our upcoming 60th Reunion, I’m afraid there’s not much chat about any other subject.  Our Reunion is, of course, virtual, and the preparation and running of it is proving to be a good challenge to us.
During the month of March and into April, an event of huge importance both nationally and internationally took place.  The trial of Derek Chauvin in the death of George Floyd started on March 8 and continued until April 20 when the verdict was read.
The jury found former Minneapolis police officer Derek Chauvin guilty on all three counts he faced over the death of George Floyd. Chauvin, 45, has been found guilty of unintentional second-degree murder, third-degree murder and second-degree manslaughter.  The  momentous decision caused a huge outpouring of marches and other manifestations of joy and anger.  As was expected, Chauvin’s lawyer immediately filed for a new trial for the usual reasons.
Also there has been a huge amount of uproar from the Democratic Party because the Republican Party is systematically going from red state to red state to enact legislation in order to reverse the outcome of the presidential election. They’re changing voting laws so less black people can vote. They still maintain that Trump won. It’s getting scary and exhausting) 4/2/21 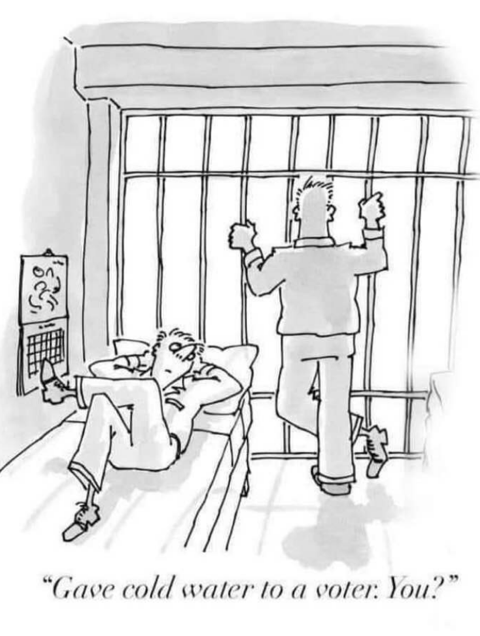 4/3/21 — Who sent this?  Hilarious, but I’m kind of ticked at the Dem news media these days for being so obviously biased — that cartoon being one.  Don’t get me wrong — I am a rabid Democrat but I would like to see less bias on both CNN and MSNBC.  Liz Webfoot

4/4/21 — I, too, found that cartoon hilarious. And an irresistible topic for any cartoonist – Dem or Rep. Ann Merchant Boesgaard

4/4/21 —
Meg, LWF is Liz Webfoot. This ends our Pandemic emails.  It’s time to move on to “normal life” which will not in the least be normal.
Liz Hottel Barrett aka Liz Webfoot, LWF