I chaired our 40th Reunion with Rocki Hill Hughes.  Some of us members started planning reunion in the previous summer of 2000 by meeting for several heavenly days at “Afterglow”, my family summer house off the coast of Maine.   Just south of Mount Desert Island, it is a 15 minute boat ride from  Southwest Harbor or Northeast Harbor.  I wish we could do it all over again.  What fun we had.

There’s nothing better than sitting around the table for supper.

Around the table are: Sally Ginsberg Abraham in the front and around the table clockwise are:  Susan Rhodes Brown, Marian Strong Moore, Dottie Smith Mann, Melissa Tyler Meyer,  Sue Wheatley Carr, Liz Hottel Barrett, Diana Diggin.  Sally and Melissa are now gone, and I love seeing them in this photo.

Comments Off on 40th Reunion Meeting

Posted on December 31, 2018 | Comments Off on Giving to Help Bennett College

From Liz Webfoot:  The chat group has been discussing MHC’s exchange with Bennett College while we were there.  Some of us remembered it, and some didn’t.  It was brought to our attention that there is a threat of closure for the college because they simply don’t have enough money to keep it open.  Below are emails and a link so that you can help fund this dying institution.  Please scroll down to “Exchange with Bennett College” and read the letter from Susan Pogue Krock who participated in the exchange and helps us understand why we should all help.  I don’t know how to identify us donors as MHC alums, but I’m waiting for a call from the Alumnae Association.  Happy New Year!  12/31/2018

Thank you Sue for a most thoughtful letter.  I hadn’t remembered the exchange program either but after reading your note and checking online, perhaps your idea of a class donation would be a good one.

Here is a link to an article about their  dilemma.  It is huge!   But the history of the school since 1873 I believe is admirable!
http://www.phillytrib.com/news/philly-alumnae-step-up-to-save-bennett-college/article_31b5ecf4-0fa8-5e42-bf97-f99eb0f2bfa1.html
….    Kim Kimball Holmquist

Comments Off on Giving to Help Bennett College

Posted on December 31, 2018 | Comments Off on Exchange with Bennett College

In our junior year, in February of 1959, I was an exchange student at Bennett.  Six of us, plus a faculty member, went to Greensboro and six Bennett students and a faculty member came to Mount Holyoke for, I think, a two-week period.  We were assigned roommates and assigned to classes that aligned with our majors–though, of course, they were quite different from our MHC classes.  I wish I could recall names, but my husband and I spend the winter in San Francisco (where we are now) and all of my Mount Holyoke memorabilia (including a picture of the 1959 group of exchange students) is in Champaign, IL.

The Bennett exchange was a fascinating experience, especially for someone who had grown up in the segregated south as I had.  The timing of our trip was also fascinating.  Don’t know if you remember that the Woolworth lunch counter sit-ins started in Greensboro.  And they had started about a week before we were scheduled to arrive.  This was a huge step in the civil rights movement in this country.  Most, if not all, of the young men who were arrested were students at North Carolina A&T university.  My roommate’s boyfriend was one of those arrested who was still in jail.   The timing of the sit-ins and the arrests also raised questions about whether it was prudent to have the exchange that year since it was thought the sight of any whites on the campus would further inflame racial tensions in Greensboro.  The decision was made to go ahead but to keep us totally out of sight–either confined to campus or moved in cars a few times in ways that we could not be seen.
This was my first and only experience in feeling like I was a minority of one.  As far as I can remember, we Holyoke students barely saw each other while we were there.  I think we were assigned to different dorms and, of course, different classes.  I realized how hyper-sensitive you can become when there’s no one else around who looks like you.  I remember walking into a room where a group of Bennett students were talking and they suddenly became completely silent.  I took it personally but realized later that they were probably talking about their boyfriends who were arrested or strategy or who knows what.  But it made me very aware of how easy it is to overreact to seeming slights when they’re not there at all.
Another sidelight to this story sheds light on what Mount Holyoke was like at that time.  I entered Mount Holyoke the month that Eisenhower had called out federal troops to protect the students integrating Central High School in Little Rock.  Although I had attended only segregated schools in Arkansas, I loathed segregation and had taken some small steps to try to change it.  So the fall we started college, Faubus and Central High were very much in the news.  Miss Kaufman was my advisor and had learned how I felt and asked me to give a talk to Holyoke high school students to show that not all southerners were racist, which I did gladly.  In 1959 I was asked (can’t remember if it was Miss Kaufman or someone else) if I would like to apply for the Bennett exchange.  I was a scholarship student and there were fees involved (plane fare, etc.) so I explained that while I would like to, I couldn’t ask my parents to pay for something (with difficulty) that they wouldn’t approve of.  (They were multi-generational southerners who were racist but not extremely so by any means.)  The upshot was that Miss Cameron called my parents, explained the program and asked if they would let me attend if the college granted me a scholarship to cover all costs.  They agreed and that’s how I went to Bennett.
Now to the most difficult question that I’ve been struggling with since the first post about Bennett a few days ago.  Bennett isn’t Mount Holyoke.  When I was there, I was (silently) critical of the academic level of the classes.  It wasn’t as good as I expected it to be or wanted it to be.  But that’s partly (or a lot of) the intellectual arrogance of a 19 year old.  So is it a good thing to have a traditionally black women’s liberal arts college with a long tradition?  I’ve worked through it as I’ve been writing this e-mail.  I think it is.  I’m not sure that Bennett has the financial base to survive but I think it would be great for us, as Mount Holyoke alums, to give some support.   Liz, is there a way for us to do that and identify as Mount Holyoke 1961 alums?
Susan Pogue Krock

Comments Off on Exchange with Bennett College 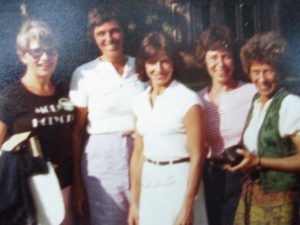 Comments Off on 20th Reunion Photo from Kim

What year was this?

1) Did you hear that the post office is thinking about charging 7 cents to mail a letter? 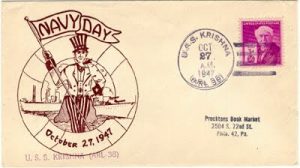 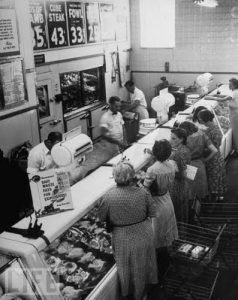 2) If they raise the minimum wage to $1.00, nobody will be able to  hire outside help at the store.

3)  When I first started driving, who  would have thought gas would someday cost 25 cents a gallon?
Guess we’d be better off leaving  the car in the garage. 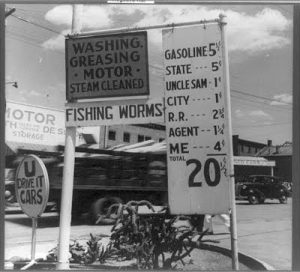 4)  Did you see where some baseball player just signed a contract for  $50,000 a year just to play ball?   It wouldn’t surprise me if someday they’ll be making more than the President. 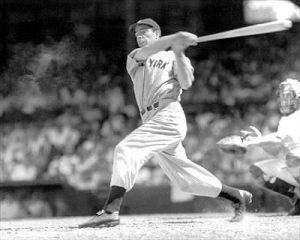 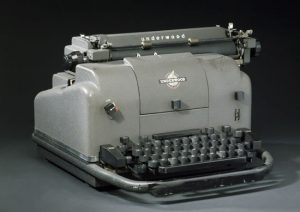 5)  I never thought I’d see
the day all our kitchen appliances would be electric
. They’re even making electric typewriters now. 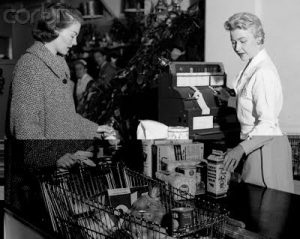 6) It’s too bad things are so tough nowadays. I see where a few  married women are having to work to make ends meet.

7)  It won’t be long before young  couples are going
to have to hire  someone to watch their kids so they can both work. 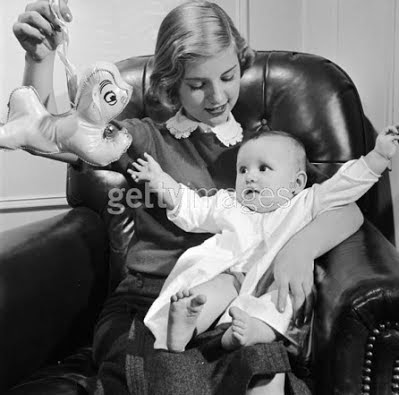 8) I’m afraid the Volkswagen car  is going to open the door to a whole lot of foreign business. 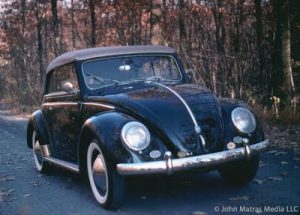 9 Thank goodness I won’t live to see the day when the Government  takes half our income in taxes. I sometimes wonder if we are  electing the best people to  government. 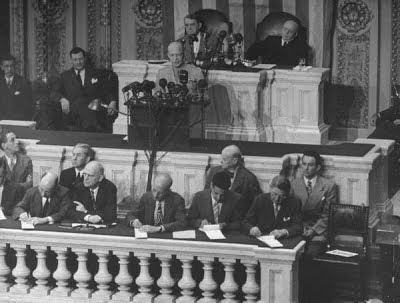 10) The fast food restaurant is  convenient for a quick meal,   but I seriously doubt they will ever catch on. 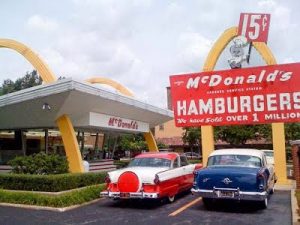 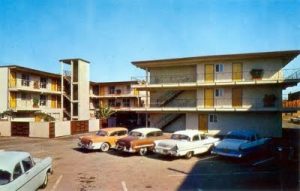 11) There is no sense going on short trips any more for a weekend. It costs nearly $2.00 a night to stay in a hotel. 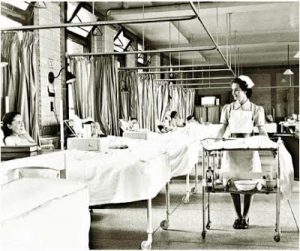 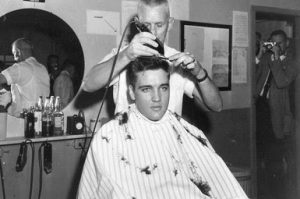 Comments Off on Kim Shares a Laugh

Slideshow with 5-second delay from Jane Shaw Dietrich’s photos:  “…but I do remember rescuing a pigeon frozen to an ice ledge outside Jenifer’s window. We couldn’t quite reach it so we got a maintenance guy to climb up and get it (#1), wrapped it in a towel and warmed it up (#2). It lived in Jenifer’s room (#3) for awhile (a few days?)–don’t remember what we fed it, but we finally set it free. Jenifer probably got tired of the pigeon shit; maybe that was why I remember her running around in a shower cap.”  Slide #4 shows Katherine enjoying their new friend. 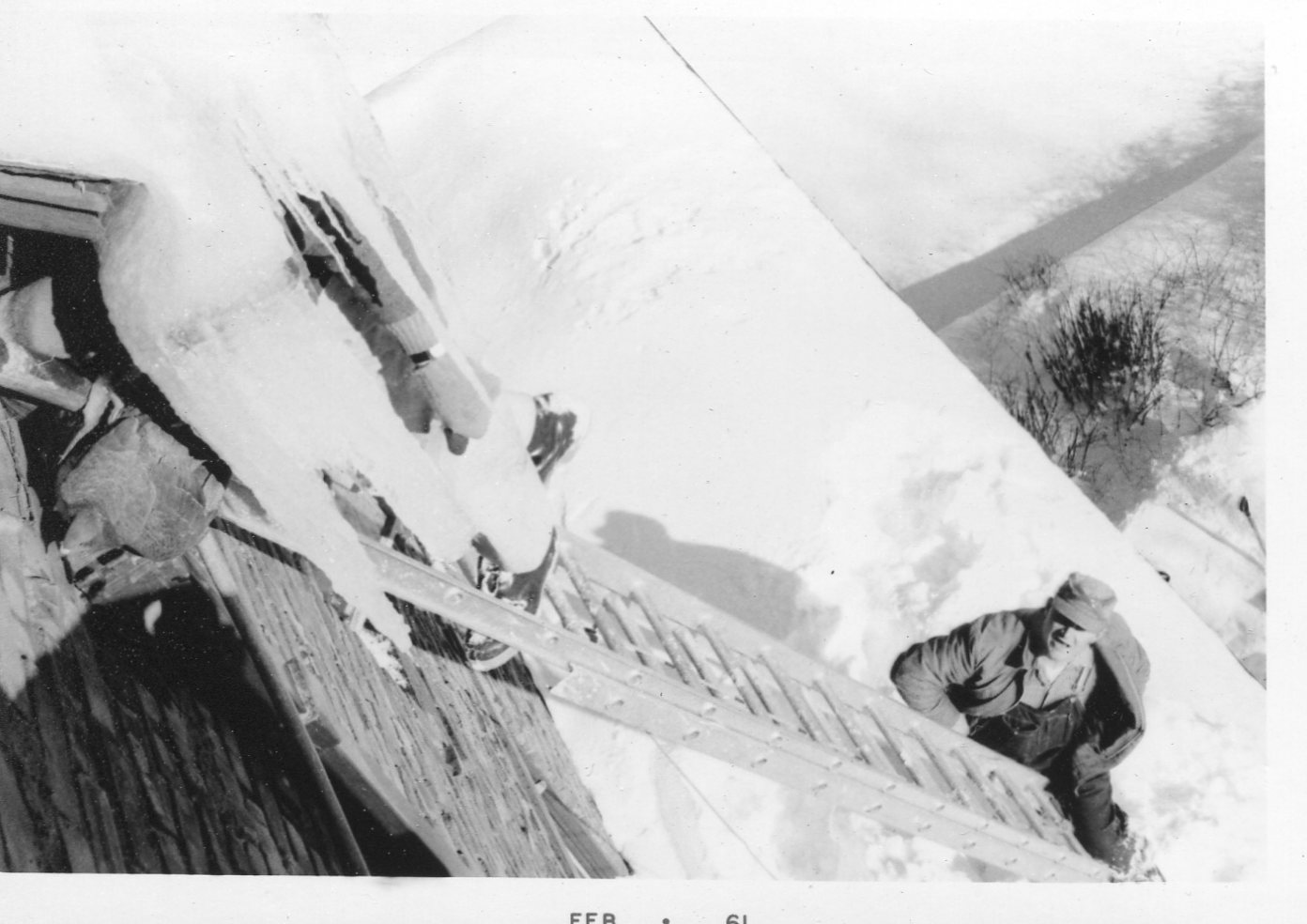 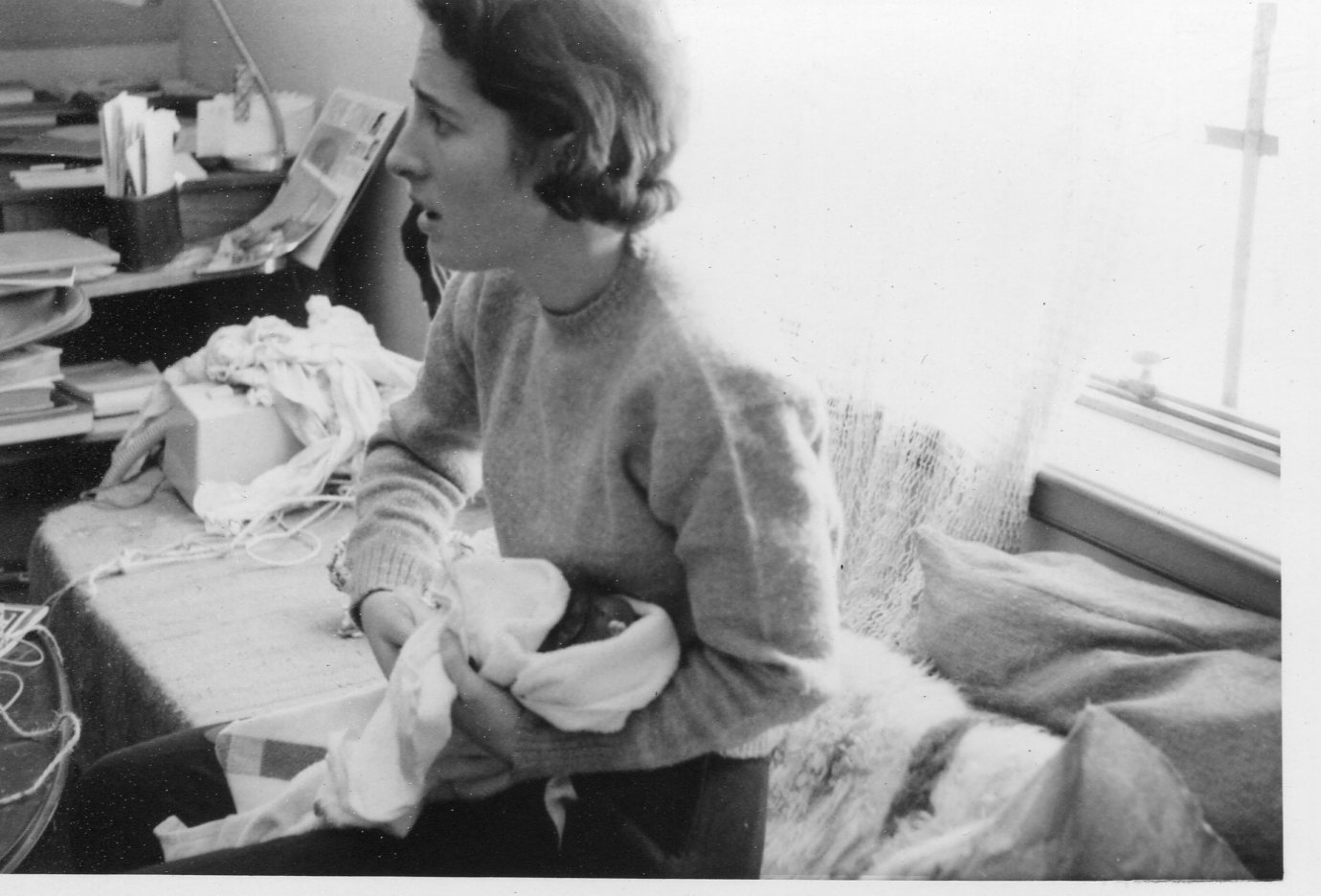 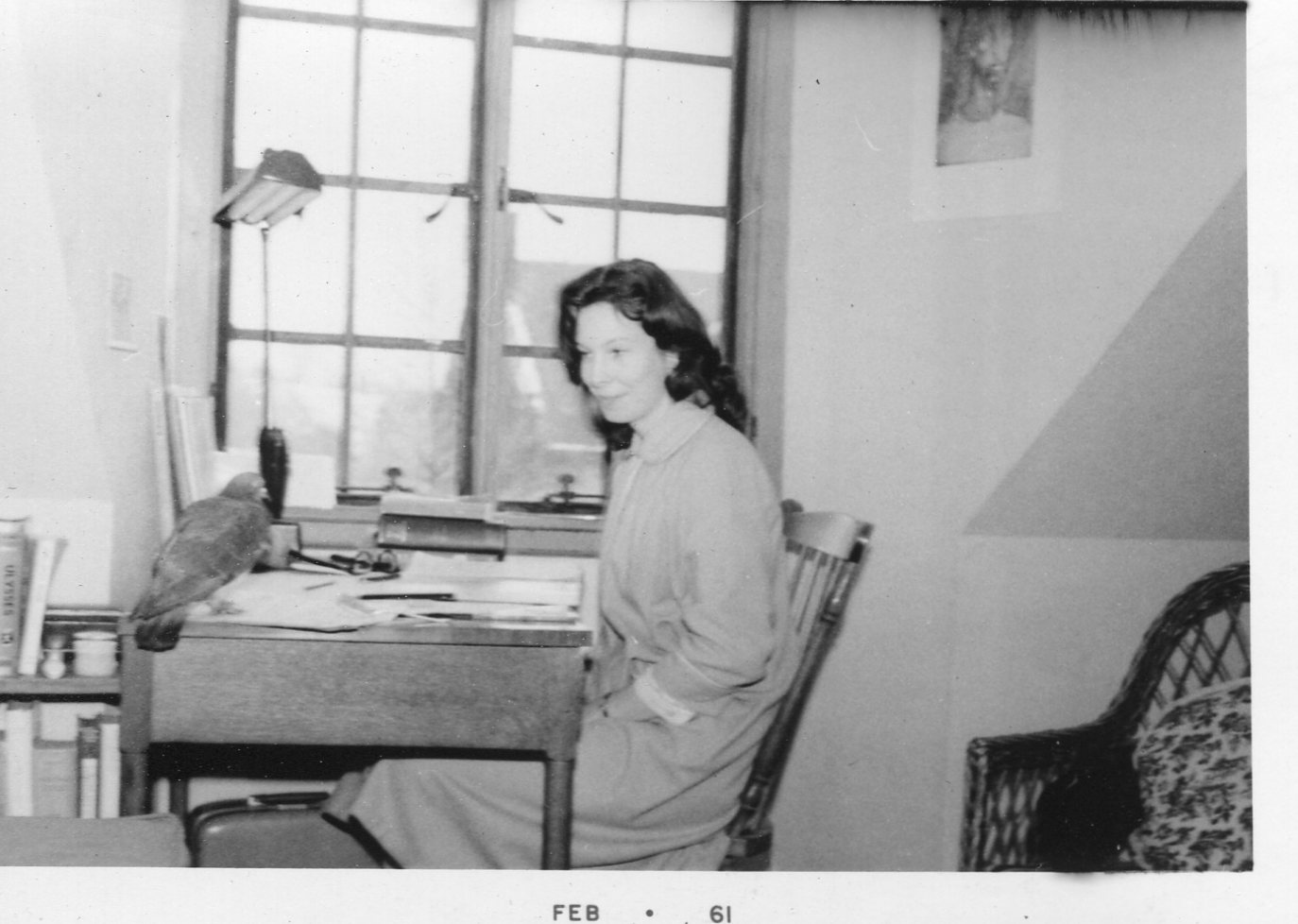 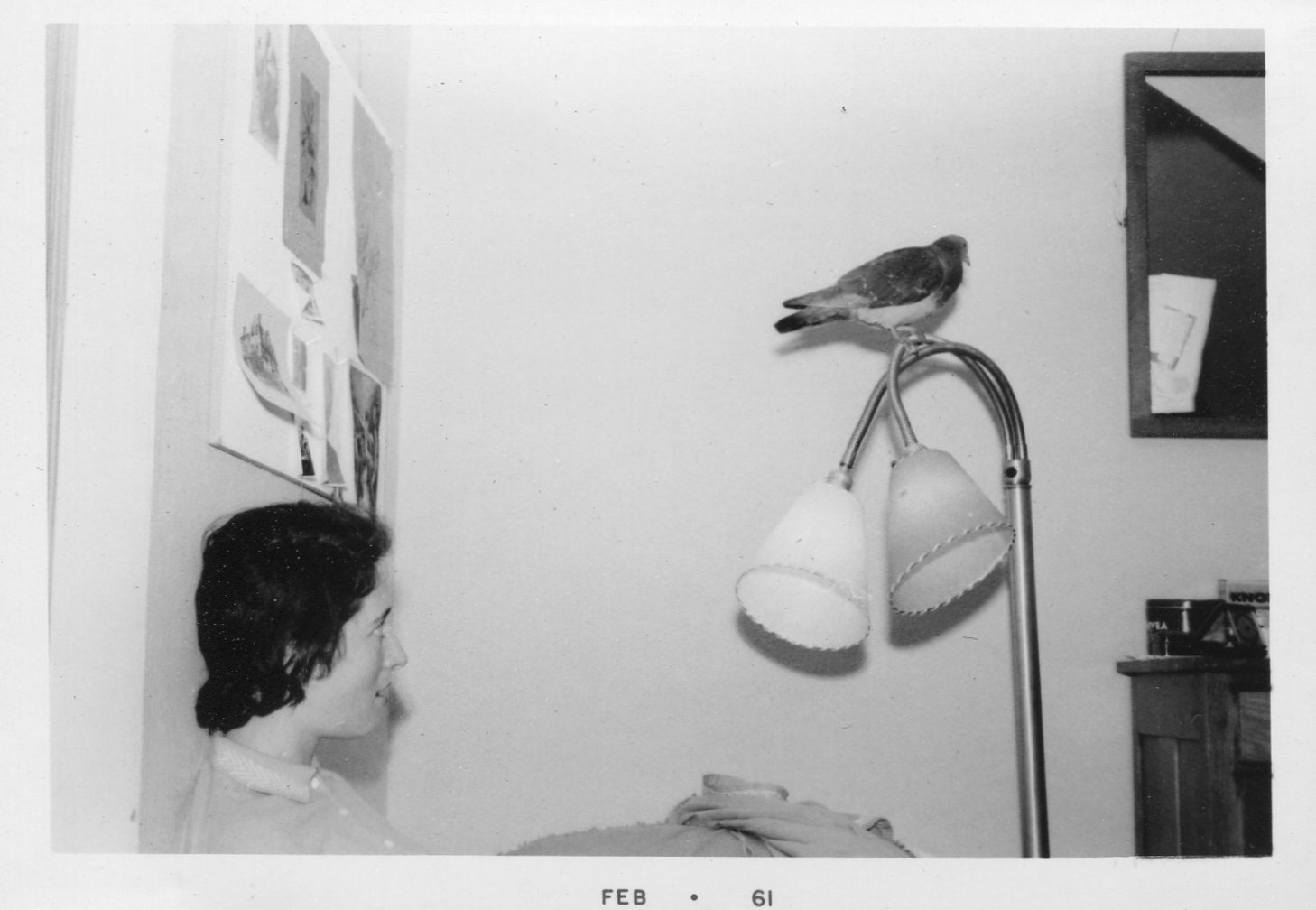 Comments Off on The Pigeon 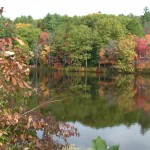 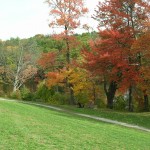 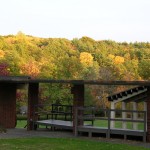 Your Webmaster is trying to figure out how to get our old PowerPoint slide show  right here.  So far, I can’t even find the file!  March 8, 2014, I found it!   But now I have a LOT of learning to do before I can share those slides on the web.  Be patient.  Some day this website will be terrific.

Don’t these bring back wonderful memories!  The photo directly below has someone in it who must have been in our class.   Does anyone know who?  Please email me if you know.   Thanks. 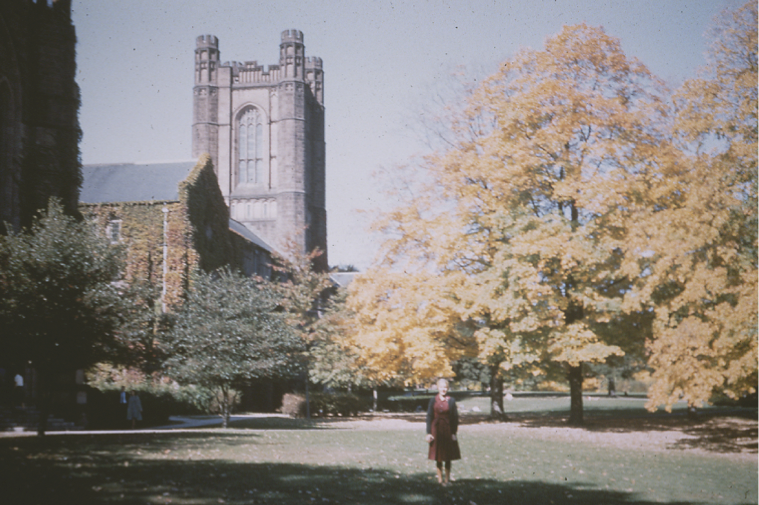 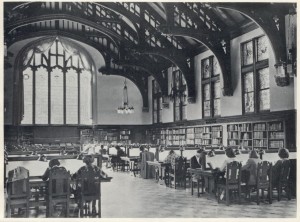 Those were the days!

Comments Off on Beautiful!

Posted on December 3, 2013 | Comments Off on Peter Viereck

I took this photo  with my cell phone one day when I was wandering around the campus and happened to spot off in the woods near upper lake the little Virgin Mary shrine silhouetted against the huge uprooted remains of a tree.  I thought, “That’s strange.” So I found a little path – “one that was old and wanted wear” (in the words of Robert Frost) – and followed it down to a small stream.  The tree and shrine were across the brook.  So I stopped and wondered.  Then I looked down at my feet and discovered to my amazement this memorial stone to Peter Viereck.  There must be people in our class who, like me, remember him with some affection – not only for his Pulitzer Prize, but for his marvelous eccentricity on a very staid, traditional campus.  It is the contrast of him vs. this shrine that filled me with wonder.  I don’t believe he was Catholic or religious in any traditional way, so I think this must just be ironic serendipity – two very different sensibilities conjuring the spiritual essence of nature, the world and life. 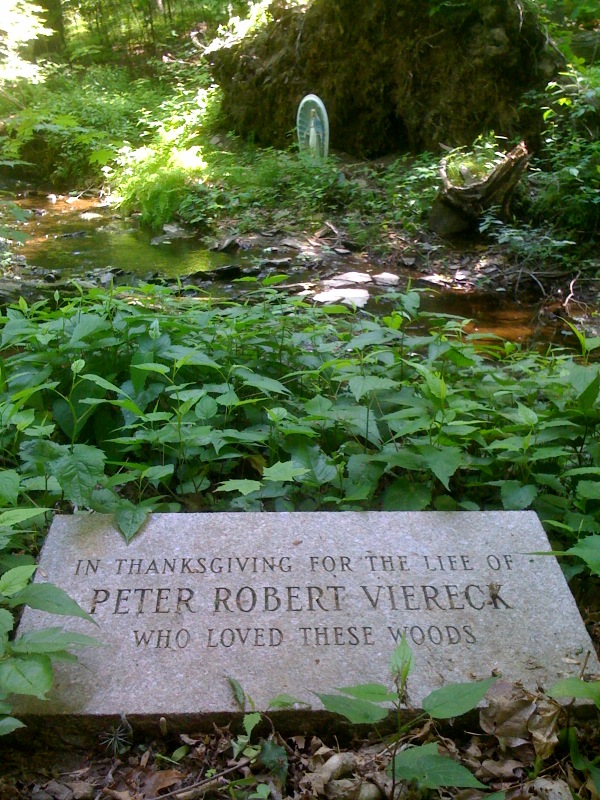 Comments Off on Peter Viereck

Kim Kimball Holmquist forwards this:  “A current MHC student named Margaret Stanne, a rising sophomore, recently contacted me after discovering the journal that Heidi Vermilya, Connie Williams, Charlotte Potter and I kept of our journey across the country visiting classmates and friends during the summer of 59, after our sophomore year in Mountainview together.  I had donated it to the archives after our last reunion.  Thought you would enjoy the blog that she sent out.” Remembering Our Trip

Comments Off on Remember This?