Only Judy could wear this! 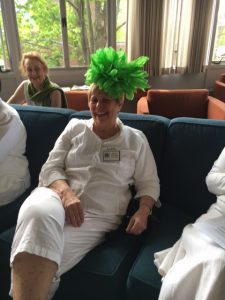 Comments Off on Only Judy could wear this!

My ‘61 classmates arrived on campus in the compliant ‘50’s, – as girls – ready for challenges and fun, wearing Bermuda shorts (or kilts) and knee socks, (soon to be replaced with the utilitarian green gym suits, boots if needed.)  We were President Gettell’s first class, i.e. the original class, of “Uncommon Women.” During our Freshman year we discovered or experienced Asian flu and the gym for quarantine; the first MHC Father’s Weekend with our own Diana as “May Queen”; gracious living, sometimes in a hastily borrowed skirt; unexpectedly strict parietals and curfews; the CI and Glessies and Romeo (who became a class honorary); pay phones “down the hall” which maybe someone would answer; and developed mastery of multi-tasking in lecture class, that is, note-taking and knitting.  For years we worked hard at our studies: in the classroom, in the lab, in the library, in Glessies, in the smoker – and we changed our ideas, courses and majors, politics, roommates, boyfriends and plans for the future.  We were fortunate to hear, in person, Robert Frost, Eleanor Roosevelt, John Updike, Odetta and Justice William Douglas. We were privileged to learn from our (mostly) revered Mt Holyoke professors: a favorite class was Dr. Giammatti’s Dante course, taught in the greenhouse! We still laugh about the “Sisters-Sisters” song and all the Jr. Show shenanigans. Many of us treasure the memories of a junior year abroad – some distant memory of the academics, many vivid memories of the travels and special new friends. The uncommon women of 1961 had 9 members of the V-8’s, successfully protested Chapel and assembly requirements, and watched the Nixon-Kennedy debate on TV (TV’s installed for the first time in our dorm living rooms.)  And finally we were Mount Holyoke’s first class to take a newly inaugurated 4-college course, (and bus!) and to graduate in the new amphitheater. We tossed our caps into a new decade, embroiled in Civil Rights and on the brink of feminism, AND WE WERE READY!

Comments Off on President’s Message

Sue Wheatley Carr, Sherry Welles Urner and Liz Hottel Barret (that’s me, aka Liz Webfoot!) all received Loyalty Awards from the Alumnae Association.  I wasn’t at reunion to receive it but boy, was I delighted when it arrived by UPS.  I had no idea what it was all about and was simply flabbergasted.  We are all beyond grateful for this recognition even though it would have been nice if the Alumnae Association had researched our MHC work before the computer age and checked with someone in our class for errors.  There was a lot of stuff left out, especially in Sherry’s case.  No matter, thank you, Alumnae Association.  It is always nice to be recognized. 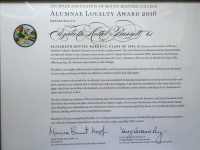 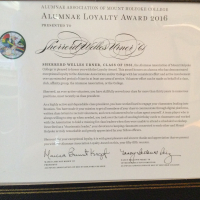 Comments Off on Loyalty Awards