Donald Trump as a Young Man 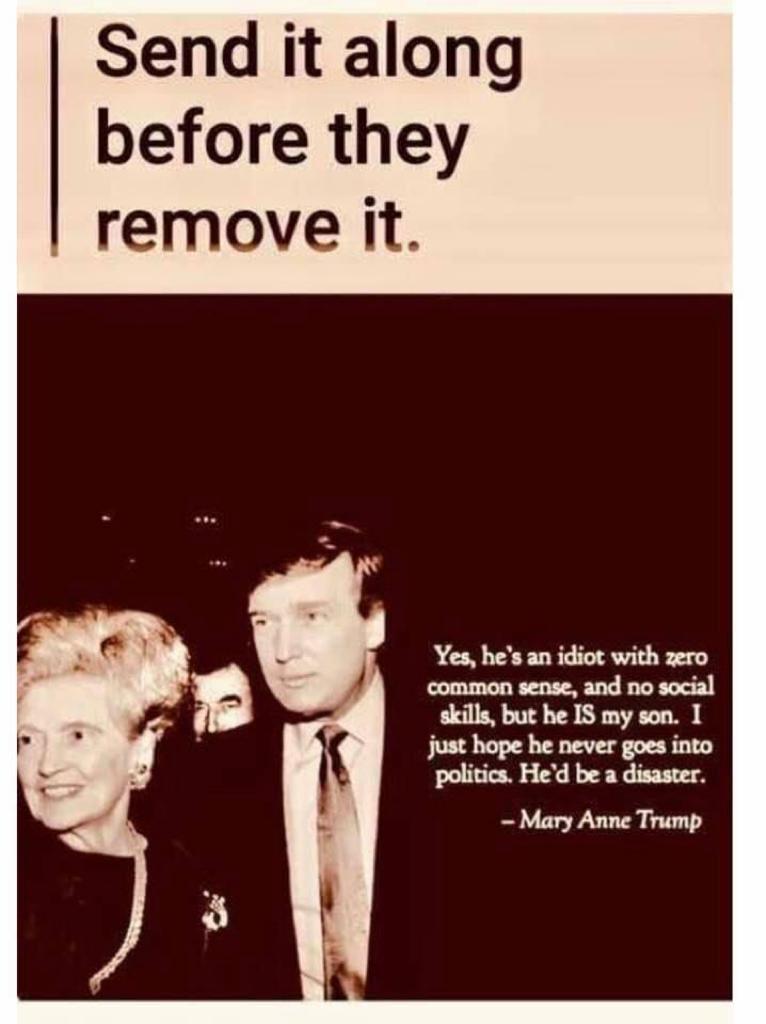 Comments Off on Donald Trump as a Young Man

Barbra Tells It As It Is

Barbra Streisand says that it is time for her to put her politics into song, and this is her answer.  Sue Wheatley Carr sent this amazing video.

Comments Off on Barbra Tells It As It Is

Posted on February 26, 2020 | Comments Off on Democratic Party Solution

Okay, so things are pretty icky in the Democratic party as concerns trying to select a candidate.  This New York Times article from Tom Freidman kind of woke me up from a total state of depression.  I can’t find out if it’s under copy-right protection, so make sure to give credit to Thomas Friedman if you want to share it with anyone.  With hugs from your website mistress,  Liz Webfoot

Dems you can defeat Trump in a landslide.
from Tom Freidman  NYT 2/26/20

If this election turns out to be just between a self-proclaimed socialist and an undiagnosed sociopath, we will be in a terrible, terrible place as a country. How do we prevent that?

That’s all I am thinking about right now. My short answer is that the Democrats have to do something extraordinary — forge a national unity ticket the likes of which they have never forged before. And that’s true even if Democrats nominate someone other than Bernie Sanders.

What would this super ticket look like? Well, I suggest Sanders — and Michael Bloomberg, who seems to be his most viable long-term challenger — lay it out this way:

“I want people to know that if I am the Democratic nominee these will be my cabinet choices — my team of rivals. I want Amy Klobuchar as my vice president. Her decency, experience and moderation will be greatly appreciated across America and particularly in the Midwest. I want Mike Bloomberg (or Bernie Sanders) as my secretary of the Treasury. Our plans for addressing income inequality are actually not that far apart, and if we can blend them together it will be great for the country and reassure markets. I want Joe Biden as my secretary of state. No one in our party knows the world better or has more credibility with our allies than Joe. I will ask Elizabeth Warren to serve as health and human services secretary. No one could bring more energy and intellect to the task of expanding health care for more Americans than Senator Warren.

“I want Kamala Harris for attorney general. She has the toughness and integrity needed to clean up the corrupt mess Donald Trump has created in our Justice Department. I would like Mayor Pete as homeland security secretary; his intelligence and military background would make him a quick study in that job. I would like Tom Steyer to head a new cabinet position: secretary of national infrastructure. We’re going to rebuild America, not just build a wall on the border with Mexico. And I am asking Cory Booker, the former mayor of Newark, to become secretary of housing and urban development. Who would bring more passion to the task of revitalizing our inner cities than Cory?

I am asking Mitt Romney to be my commerce secretary. He is the best person to promote American business and technology abroad — and it is vital that the public understands that my government will be representing all Americans, including Republicans. I would like Andrew Yang to be energy secretary, overseeing our nuclear stockpile and renewable energy innovation. He’d be awesome.

“I am asking Representative Alexandria Ocasio-Cortez to serve as our U.N. ambassador. Can you imagine how our international standing would improve with youth worldwide with her representing next-gen America? And I want Senator Michael Bennet, the former superintendent of the Denver Public Schools, to be my secretary of education. No one understands education reform better than he does. Silicon Valley Congressman Ro Khanna would be an ideal secretary of labor, balancing robots and workers to create “new collar” jobs.

“Finally, I am asking William H. McRaven, the retired Navy admiral who commanded the U.S. Special Operations Command from 2011 to 2014 and oversaw the 2011 Navy SEAL raid that killed Osama bin Laden, to be my defense secretary. Admiral McRaven, more than any other retired military officer, has had the courage and integrity to speak out against the way President Trump has politicized our intelligence agencies.

Only last week, McRaven wrote an essay in The Washington Post decrying Trump’s firing of Joe Maguire as acting director of national intelligence — the nation’s top intelligence officer — for doing his job when he had an aide brief a bipartisan committee of Congress on Russia’s renewed efforts to tilt our election toward Trump.

“Edmund Burke,” wrote McRaven, “the Irish statesman and philosopher, once said: ‘The only thing necessary for the triumph of evil is for good men to do nothing.’”

If Bernie or Bloomberg or whoever emerges to head the Democratic ticket brings together such a team of rivals, I am confident it will defeat Trump in a landslide. But if progressives think they can win without the moderates — or the moderates without the progressives — they are crazy. And they’d be taking a huge risk with the future of the country by trying.

And I mean a huge risk. Back in May 2018, the former House speaker John Boehner declared: “There is no Republican Party. There’s a Trump party. The Republican Party is kind of taking a nap somewhere.”

And I will tell you the day it died. It was just last week, when Trump sacked Maguire for advancing the truth and replaced him with a loyalist, an incompetent political hack, Richard Grenell. Grenell is the widely disliked U.S. ambassador to Germany, a post for which he is also unfit. Grenell is now purging the intelligence service of Trump critics. How are we going to get unvarnished, nonpolitical intelligence analysis when the message goes out that if your expert conclusions disagree with Trump’s wishes, you’re gone?

I don’t accept, but can vaguely understand, Republicans’ rallying around Trump on impeachment. But when Republicans, the self-proclaimed national security party — folks like Lindsey Graham, Marco Rubio and Tom Cotton — don’t lift a finger to stop Trump’s politicization of our first line of defense — the national intelligence directorate set up after 9/11 — then the Republican Party is not asleep. It’s dead and buried.

And that is why a respected, nonpartisan military intelligence professional like Bill McRaven felt compelled to warn what happens when good people are silent in the face of evil. Our retired generals don’t go public like that very often. But he was practically screaming, “This is a four-alarm fire, a category 5 hurricane.” And the G.O.P. response? Silence.

Veteran political analyst E.J. Dionne, in his valuable new book, “Code Red: How Progressives and Moderates Can Unite to Save Our Country,” got this exactly right: We have no responsible Republican Party anymore. It is a deformed Trump personality cult. If the country is going to be governed responsibly, that leadership can come only from Democrats and disaffected Republicans courageous enough to stand up to Trump. It is crucial, therefore, argues Dionne, that moderate and progressive Democrats find a way to build a governing coalition together.

If they don’t join together — if the Democrats opt for a circular firing squad — you can kiss the America you grew up in goodbye.

Comments Off on Democratic Party Solution

There’s been lots of discussion these past few days (10/12-15)about what Trump is doing, and I’m attempting to include it here for those of you who haven’t been part of the chat group.  It’s difficult to copy conversations, but bear with me and give it a try if you, too, are interested.  Liz Webfoot

To Buy a Gun

Katherine Snelson sent this to me, Liz Webfoot.  I plan to send it to every politician I know.  It is absolutely BRILLIANT!

How about we treat every man who wants to buy a gun like every woman who wants to get an abortion – mandatory 48-hour waiting period, parental permission, a note from his doctor proving he understands what he’s about to do, a video he has to watch about the effects of gun violence…Let’s close down all but one gun shop in every state and make him travel hundreds of miles, take time off work, and stay overnight in a strange town to get a gun.  Make him walk through a gauntlet of people holding photos of loved ones who were shot to death, calling him a murderer, and begging him not to buy a gun.

Comments Off on To Buy a Gun

Katherine Snelson’s daughter Andrea forwarded this to her, and her to us.  Great read.  Thanks, Katherine/Andrea

Comments Off on Threat of Fascism

Today, Planned Parenthood and the American Medical Association filed a lawsuit against the Trump-Pence administration’s dangerous, immoral gag rule. We are suing this administration for its attempt to dismantle Title X, our nation’s program for affordable birth control and reproductive health care. This gag rule would ban providers like me from delivering comprehensive, medically accurate information to Title X patients. It is unethical and unconscionable, and it compromises the oath I took as a doctor to provide honest and accurate care to all people, all patients — always. Most importantly, it threatens the health of the more than four million people who receive care through this program. That’s why Planned Parenthood is fighting back.

Title X, lauded as one of America’s most successful public health programs, has reduced unintended pregnancies and STI rates nationwide. Since 1996, Congress has asserted that pregnant Title X patients must receive complete, unbiased, non-directive information about their options — including abortion. This went even further in 2010, when Congress mandated that the Department of Health and Human Services cannot impose rules to create unreasonable barriers to care. This gag rule illegally interferes with these mandates, medical practice standards, and providers’ ethical obligation to patients. It would prohibit counseling Title X patients on or referring them for abortion care, and would impose cost-prohibitive, medically unnecessary requirements to separate abortion care from all other services — from health records to entire facilities.

As a doctor, I know this would have widespread consequences on public health outcomes. And because the majority of Title X patients identify as people of color, it would worsen existing health disparities and racial inequities. It is yet another tactic by the Trump-Pence administration to ban abortion, limit access to sexual and reproductive health care, and block care at Planned Parenthood health centers.

We will always be here for all patients — and are proud to serve all people. Thanks to your support, Planned Parenthood will continue fighting until reproductive health care, including abortion, is recognized as a fundamental human right.

We will keep you updated as the case moves forward. Thank you, as always, for standing with us.

Comments Off on Trump’s Gag Rule

Posted on February 8, 2019 | Comments Off on Pelosi Takes Trump and Washington to School

I have been encouraged  to put political discussions here as long as they are rational  and not one-sided.  Thanks to Marty Mulloy for sending this:  “I’m a fan of Nancy Pelosi and Joan Venocci, columnist in Boston Globe.’  Loved this Opinion piece last week.:”

Comments Off on Pelosi Takes Trump and Washington to School

From Liz Webfoot, your web mistress:   During the election campaigns, I decided that putting political discussions on the web site was inappropriate.  My decision was based on something that came up in the chat group.  The majority of us are Democrats, and our Republican classmates had got fed up with our bias.  Since then I have generally stuck with apolitical topics on the website.

However, politics is so much a part of our lives right now that I am having second thoughts.  After receiving a few comments from classmates, I think it is appropriate to put in discussions about current affairs.

Comments Off on What About Politics?