Christmas is a big deal in our house. Apart from MHC elfing tradition I used to play Christmas elf (or nisse as one would call it in Denmark) for my friends in College, I loved playing Krampus for the German club and shared the German tradition of advent with my friends.

When I met my Danish husband and he told me he was atheist, my reply was, him not believing in God was not an issue, but Santa Claus and the Easter Bunny, I’m afraid, were non-negotiable (both not traditions in his family).

When my oldest son was about three, he collected his hat, gloves, wrapped presents that he put in his car seat using it as a sleight and strapped our straw reindeer in front. When I asked why he wanted to be Santa Claus he answered “to bring presents to people”. A few years later, he asked me in earnest, when, I thought, Santa Claus would retire and if it work out time-wise for my son to take over the job once that happened.  It is still the most magical time of the year for our kids.

My mother always baked her own Weihnachtsstollen. It is not as sweet as the kind you buy in the shop in Germany and hence has been for years very popular with friends and extended family. My mother used to bake several and gave them away to family and friends. Somehow, I have inherited  that tradition. I usually bake three every year and we eat about one, and give and mail the rest to family and friends. In Georgia, I cant get fresh yeast, so adjusted the recipe for dry yeast. But since it depends where you live and what you can get, I will list the original recipe and the adjustments I have made to fit my circumstances.

My mother always complained that her Stollen flattened too much in the baking and actually halved the recipe, she tried to keep it in check by placing it in all kinds of forms, etc. but was never happy with the result. In my experience, it is better to make the original portion as the mass makes it slower and it flattens out less.

Be aware that the cake needs to settle after you baked it for the best result. 10 days minimum better is 14 days or even 4 weeks. Hence, I tend to bake the first one at the beginning of November for it to be ready for cutting by the beginning of December.

Some of the ingredients might be tricky to source I usually buy them in Germany and bring them to Georgia, obviously, I wouldn’t know where you can obtain them at the place you live.

Soak the following four incredients in Rum overnight or longer:

For after the baking:

*(in Georgia my experience it is best to add flour slowly as I don’t always manage get the full amount in with the fluidity given, in Germany I do not have the issue, so depending where you are and what the humidity there is, just be aware that this could be an issue.

***  these days most people substitute bitter almonds by using an extract or chemical substitute you can buy in the supermarket,  however, my husbands really dislikes the fake, chemical taste of it, so I reverted to buying the original bitter almonds.

(Background: Most almond trees produce a small quantities of bitter almonds, since they are – unlike the non-bitter almonds sisters – in their raw form highly poisonous or toxic (hydrogen cyanide) , modern production sorts them out.  In many countries, bitter almonds can be a bit tricky to come by.  In Germany, you can find them in Reformhaus or in the Pharmacy. Don’t let them lie around, but once you bake or heat them, the cyanide has evaporated.)

**** again, we dislike the packages sold as Vanilla sugar in the Supermarket, so I tend to make my own Vanilla sugar by sticking scraped out vanilla beans into very fine sugar and leave it there until they are completely dried out, so  I use a mixture of half powered sugar and half self-made Vanilla sugar, about 250 grams in total. 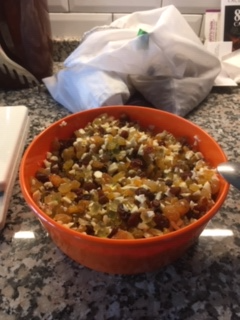 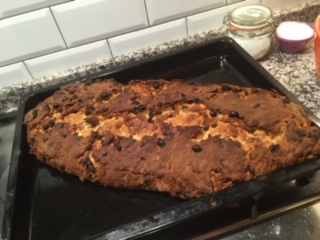 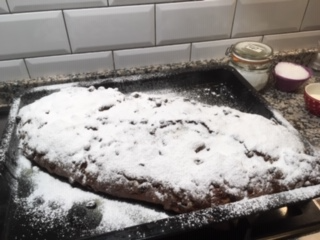