This recipe is a mix of some of my fondest memories as a child/teenager. From 6 to 19 years old, I spent my summer holidays with my parents on the island of Elba, in Tuscany. We were renting a tiny panoramic house overlooking the sea in a village with the same people going there year after year. We had also met a local family with a grandma who was a chef and they were often inviting us to their place. They gave us this recipe and it still tastes like sun, sea, Mediterranean summers, youth, dancing under the stars on the beach and friendships.

Adding wild asparagus was my personal touch to it. As a child, I would go and collect them in the woods with my grandparents. Doing it was a clear sign that summer and all the joy it brought was around the corner.

So this recipe is a homage to a great time of my life and to the people around me who made it so special. All of that served on a plate. Magic 🙂

Put the clams in a bowl with cold water and add two tablespoon of salt. Stir. Let them rest in the fridge for about 6-8 hours, changing the water twice or three times, until there is no sand left on the bottom.

Put some olive oil in a pan, add some chopped garlic and stir until gold. Add the clams, the glass of wine, cover with a lid and cook until all the clams are open (5-6 minutes). In a separate pan, boil some water, add salt and cook the penne “al dente”. Steam the wild asparagus.

Put the clams in a bowl when ready, get rid of a few shells and filter the liquid left in the pan. In that same pan, add the penne, add the filtered liquid, two beaten eggs and the cooking cream. Stir everything together. Add the steamed asparagus after blending them (this is optional if wild asparagus are not available; the recipe will taste just as great without). Stir for 2-3 minutes, sprinkle parsley on top and some pepper and serve hot. 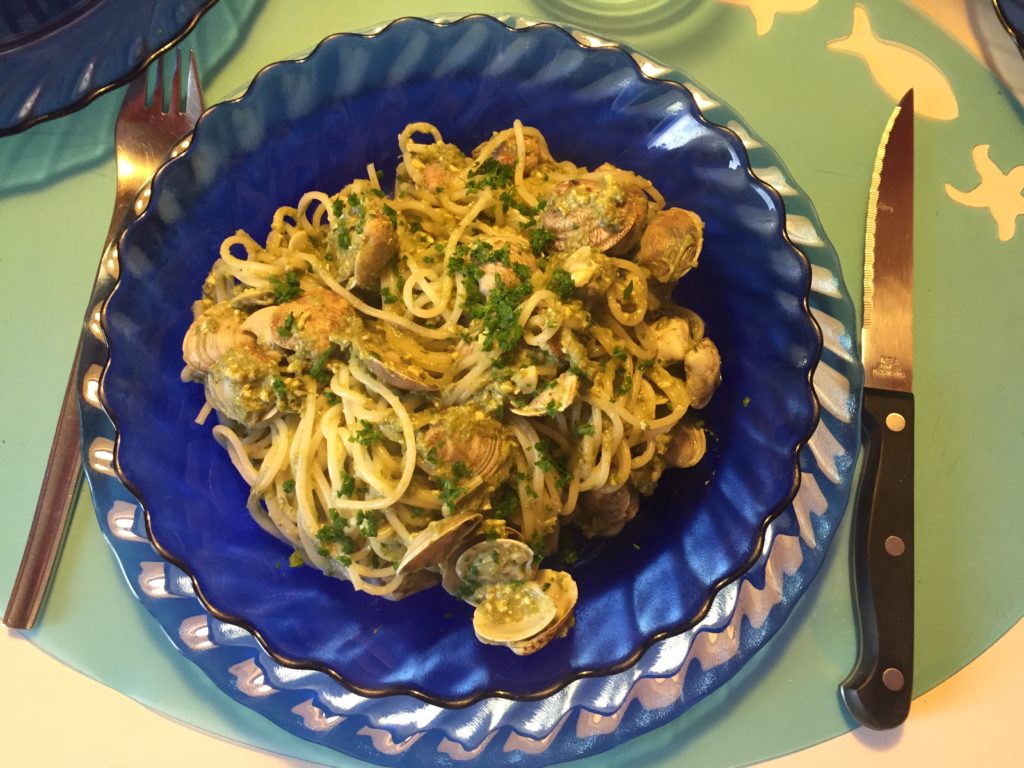 Friend’s recipe, with my own personal touch.