Pīrāgi are small bacon and onion pies which originate from the Baltic state of Latvia. They are baked in large batches and served year round, but especially at every large gathering and festival. I’m from the USA but my family on both sides emigrated from Latvia, so I grew up baking these in the kitchen alongside my grandmothers at every holiday. Each household has their own variation of the recipe so it’s able to be tweaked (one of my grandmothers included SPAM in her recipe), but however you make them, your kitchen is guaranteed to smell amazing!

Combine yeast, sugar, and ½ cup of lukewarm milk in a small bowl and set aside for 10 minutes until yeast activates and mixture becomes frothy.

In a large bowl, whisk together 1 egg, melted butter, ½ cup of milk, yeast mixture and sour cream. Mix in flour a half cup at a time until dough forms. Knead dough by hand until consistency is soft and springy. Coat the ball of dough with olive oil, place back in bowl and cover with a damp cloth. Let rise 1 – 1.5 hours or until dough doubles in size.

Meanwhile, make the filling: Heat oil in a saucepan over medium heat. Add bacon and cook until fat renders. Add onion and cook, stirring, about 5 minutes until onion is lightly caramelized but bacon is not crisp. Drain fat and season with salt and pepper. Let cool.

Heat oven to 400°F. Whisk together egg yolk and 1 tbsp. water; set egg wash aside. Transfer dough to floured work surface. Roll out dough to 1/4” thickness and cut out dough rounds using a cookie cutter. Place 1 tsp. heaping spoonful of bacon filling in center of each round. Moisten the edges of dough rounds with egg white and fold over to enclose filling, pinching edges together to seal and form buns into a crescent shape. Avoid getting grease from the dough filling onto the edges of dough circles, as they will likely pop open in the oven. Transfer the buns, seam side down, to a parchment-lined baking sheet. With a pastry brush, coat each bun with egg wash. Sprinkle a few caraway seeds over each bun. Cover with a damp towel and let rise again, about 20 minutes. Bake in oven for 10-12 minutes until golden brown. Enjoy! 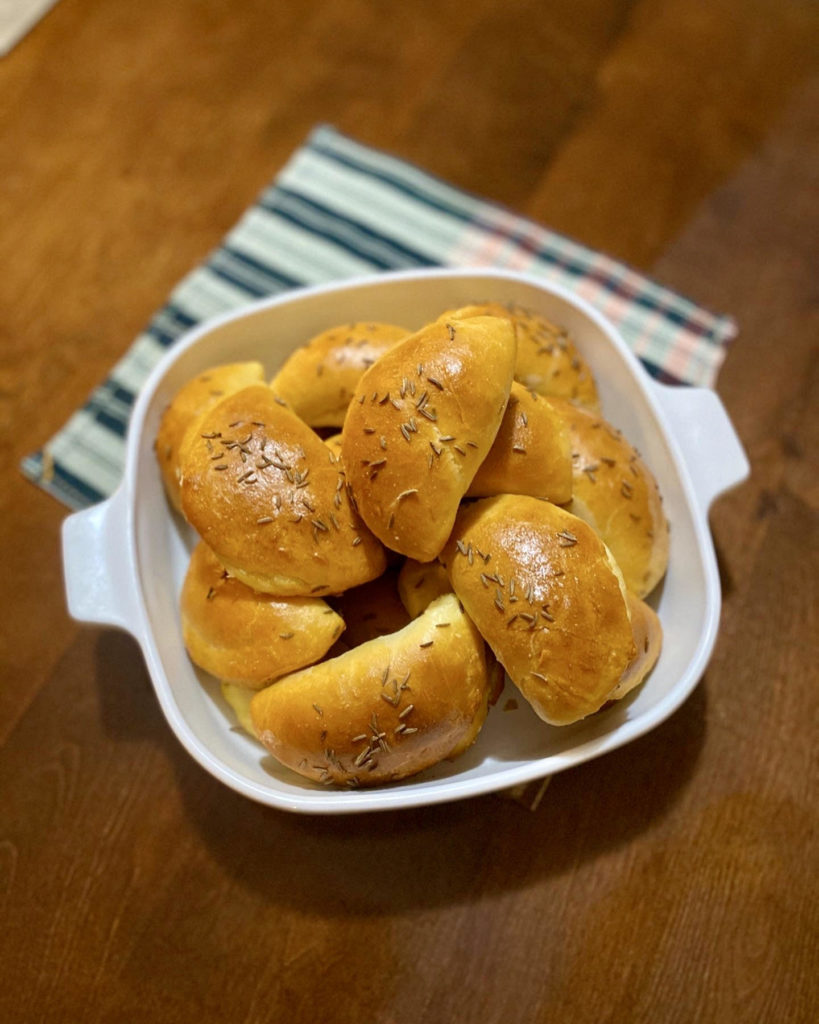