After your hear the bells of your cell phone notification for Mountain day gather with us at the 18:63 hour to remember Mountain days past.  We are gathering in Palo Alto, San Jose and Monterey. Check the Alumnae site for Mountain Day reunions for exact locations near you.

We will also be posting a hike too, watch for it here or on Facebook.

Look for your invite to meet and share with prospective students for Mount Holyoke College.

Celebrate the founding of Mount Holyoke Female Seminary in November 1837 by the visionary and dedicated Mary Lyon. A most beloved Mount Holyoke tradition is to gather over ice cream to honor Mary Lyon and the founding of our alma mater. Please join fellow alumnae and prospective Mount Holyoke students for conversation and refreshing treats. Be sure to bring your favorite stories about life at the College, though as the interested students will be most interested in what Mount Holyoke is like now, it would be great to have several of our newest alumnae come tell their stories.

Also, if you know of any high school girls in 10th through 12th grade who may be interested in applying to MHC, please invite them to this event!

Contact Eliz Adem, adem22e@mtholyoke.edu, to RSVP and get location of Lassie’s home.

First and foremost, if you have not done so, I highly encourage you to join the alumnae Facebook group for the Mount Holyoke Club of the Peninsula for updates on events, quick meet ups, or if you would like to see what we’ve been up to.

Summer is flying by and fall is steadily approaching! We are excited to have the newest members of the MHC family, the Class of 2021, from the Bay Area to be soon heading out to Mount Holyoke in the next month! Our traditional send-off party, Fog to Foliage, will be a wonderful opportunity to connect with the new students as well as meet their parents and show the support network they have back home.

We also have other traditions coming up this fall such as the young alumnae fall/cider party and, of course, our ice cream social for Mountain Day! We look forward to welcoming fall with you and hope to see you all at our events. Please visit here to keep reading the club‘s August newsletter.

The Mount Holyoke Club of the Peninsula and Lisa Piniella Shiveley ’88, executive director of Menlowe Ballet, invite you to a performance of their Nutcracker Ballet.

“For a long time I’ve wanted to create a Nutcracker that touches people’s hearts in a different way,” says choreographer Michael Lowe. “I first watched Frank Capra’s film It’s a Wonderful Lifeover 40 years ago and was captivated. I always felt that the movie’s tone and storyline could translate beautifully into a new kind of Nutcracker that celebrates the best of both stories.”

To bring his vision to life, Lowe collaborated with Artistic Associates Julie Lowe and Sarah-Jane Measor to craft the ballet’s narrative. Set in the early 40s in a fictional American small-town, the production honors most of the traditional elements that make Nutcracker a holiday favorite. Says Lowe, “Our tale is refreshed with unique twists and a heartfelt message illustrating that while giving and receiving “presents” is part of what makes the holidays wonderful, it is the physical “presence” of those who are important in our lives that imparts lasting meaning.”

Prior to founding Menlowe Ballet in 2011, Michael Lowe enjoyed an illustrious performing career as a dancer, appearing in numerous traditional Nutcrackers. In Menlowe’s production of “It’s a Wonderful Nutcracker”, Lowe returns to the stage as Drosselmeyer, a character who embodies the heart and spirit of the film’s lead character George Bailey, famously portrayed by Jimmy Stewart. Menlowe’s production also features a taste of 1940s swing dance performed by professional ballroom champions Chelsea Farah and Eric Koptke. Joining the professional cast are students from the Menlo Park Academy of Dance.

Costume Designer Connie Strayer, is a Senior Lecturer and Design Teacher at Stanford University. She has designed costumes and textiles for companies including San Francisco Ballet, Alonzo King LINES Ballet, Smuin Ballet, ODC, Oakland Ballet, TheaterWorks, ACT, Opera San Jose and Teatro Zinzanni. Scenic Designer Brent Brimhall, is a designer and fine artist whose work spans the globe. Most recently he completed the design and execution of the exterior facade of the 5-star Baha Mar Casino and Hotel.

Based in Menlo Park, CA, Menlowe Ballet is a professional ballet company dedicated to bringing dance to audiences throughout the San Francisco Bay Area. Founded in 2011, the company performs works that encompass cultural, classical, and contemporary styles. In addition to its artistic mission, Menlowe Ballet provides performing opportunities to aspiring students from its official ballet school, the Menlo Park Academy of Dance.

UPCOMING EVENTS
Mary Lyon Tea Sampling
1:00–4:00 p.m. Sunday, February 28
at Anne Raphael’s home, Los Altos Hills
As some of you may remember Mary Lyon was born on February 29, 1797, and it is our tradition to recognize her birth with tea. We have decided this year, rather than have a formal tea, we would do a tea sampling and ask everyone to bring their own favorite tea and tea snacks to share.Anne Raphael ’62 has not only volunteered her house but also many tea pots, tea balls, etc., so we can brew several types from Jasmine Dragon Pearl to Earl Grey or whatever exotic blend you can find. If you don’t have a special tea treat, Anne suggests trying out some lowered calorie goodies from Alice Medrich’s book, Chocolate and the Art of Low-Fat Desserts. Anne says that she has some wonderful tea loaves and tortes, biscotti, and meringues, which can be enjoyed without the usual guilt trip. It will be “gracious living” without the dress code requirements of skirts, girdles, nylons, and polished heels that MHC expected before 1960. No fancy hats or gloves needed either.
Cost is $5 for club members and $10 for nonmembers. We will take payment at the door. All proceeds will go to the club.Please RSVP to Trudy Levy and think about carpooling.You can also take this opportunity to support the Mount Holyoke Peninsula Club by paying your club dues!Club dues go toward social and educational programming for alumnae, as well as local events and activities for prospective and incoming students. Dues cover our fiscal year from July 1 through June 30.Dues:
$20: Regular members
$10: Class of 1965 and earlier; class of 2005 and laterPlease make your check out to: Mount Holyoke Club of the Peninsula
And send to treasurer: Jerri Barrett, 589 Budd Avenue, Campbell, CA 95008-4610

Save the Date:
February and March: Decades gatherings—A great opportunity to socialize with other graduates from your decade. Look for emails from your organizers.

Early April: Rose Drop—We congratulate high school seniors on their MHC acceptance by hand-delivering roses to them at their high schools. If you’re interested in helping out by donating your time and mileage, please emailJoanne Petersen and Anne Raphael.

Look to Facebook and email blasts for more information about these upcoming events or send either of us an email query.

We kicked off the year with a Fog to Foliage sendoff of 5 members of the class of 2019 in October.  Not all our advice was current, but well received in any event. This was followed by events honoring Mountain Day, including a hike at Villa Montalvo that Carolyn Bickford organized with 12 alumnae and friends and family. Look for Carolyn’s next jaunt, a tour of the Gilroy Yama 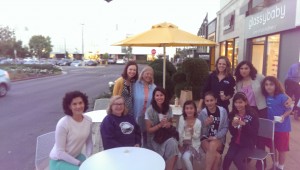 For those not into walking, two groups gathered simultaneously upon getting the em 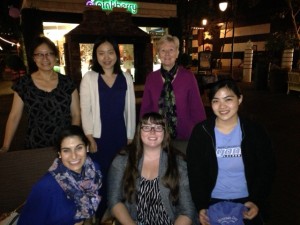 ail anouncement at Pinkberry’s in Palo Alto and San Jose to celebrate another Mountain Day tradition.  To wrap up October, Joanne Petersen lead us to the Elkhorn Slough to learn the difference between seals and sea lions and have fantastic hot chocolate while the sun set.

In November, eighteen of us had a docent tour of the new Anderson Collection at the Cantor Museum, while others regaled possible incoming students with hot cider. We had meant to do that in the park, but fortunately the library let us come in out of the rain. Though, we were able to enjoy some cider outside afterwards.

December saw us swapping favorite cookies and books, almost as many books as cookies, followed by the Nutcracker as reimagined by the Menlowe Ballet thanks to Lisa Shiveley.

In January Carolyn Bickford took us to Gilroy Yamayo Hot Springs for a great tour of an old historical resort and spa, which for a time was a shelter for interned Japanese after the war.