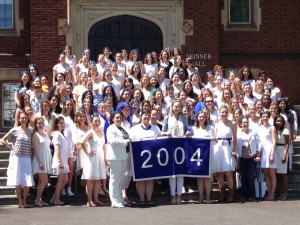 Has it really been 10 years?  Driving through the gates it seemed like just yesterday that we left, parents cars stuffed with boxes and clothes – leaving our lives as students behind. Yet here we are.  There are things that stayed the same – walk to the Delles is still really far, for instance.  The chocolate chip cookies from Blanchard are still amazing. We couldn’t help but reminisce. Remember when …

Our theme for Reunion 2014 was “Hang 10” which is crazy and fun and all about surfing – a sport where in order to succeed you have to find a balance, have fun, stay calm, and live just on the edge of danger. It’s a fitting theme for our class of mavericks and adventurers – dedicated teachers, doctors, engineers, therapists, lawyers, writers, and everything in between.

Our sophomore year was marred by the 9/11 terrorist attacks, which happened on a Tuesday morning when we were in class, sleeping in or working out in Kendall.  Also that year, Apple released its first iPod, the Euro was debuted in 12 countries and the cost to mail a letter was a mere 34 cents.

During our junior year, Kendade science center was built and Blanchard was closed for renovation.  During this time, our PO boxes and WMHC radio station were relocated to the basement of Wilder.

Our senior year, we watched the Justin Timberlake and Janet Jackson superbowl scandal and the finale of hit TV shows Friends and Sex and the City.  On graduation day, we listened to commencement speaker Kim Campbell, the first female prime minister of Canada.

The Class of 2004 is very excited to be back on campus for our first alumnae reunion, and also to welcome our little sisters, the Class of 2006, to the ranks of Mount Holyoke alumnae!

The Class of 2004 was the first to have a “common read” – “Refuge” by Terry Tempest Williams, was our first assignment before enrolling in MHC the fall of 2000.

Our sophmore year, we brought back the tradition of class rings, introducing a ring that is now available to all classes. That same year, WMHC celebrated its 50th anniversary and Apple released its very first iPod.

During spring break of our junior year, while we were studying abroad, on the beaches of Mexico or right here on campus, the Iraq War was officially declared.

And our senior year, we watched the final episode of Friends on NBC, the U.S. Women’s Open was in final preparations to be held at the Orchards golf course, and the March for Women’s Lives occured in Washington, DC. Many of our classmates chose to forego Senior Ball in order to participate in this monumental event.